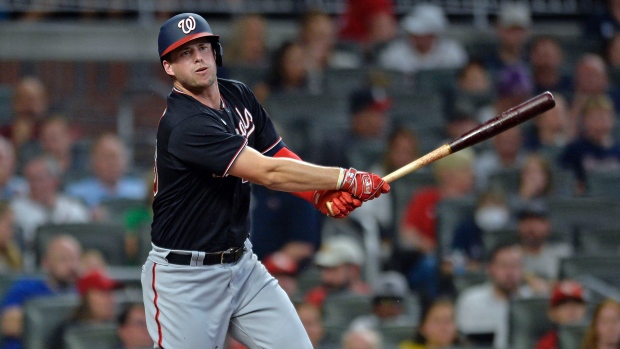 The new face under the mask: Riley Adams

Get to know one of the two new catchers that the Washington Nationals are planning on becoming part of their future: Riley Adams

In July, the Washington Nationals made a trade that sent left-handed relief pitcher Brad Hand to the Toronto Blue Jays in return for a 6′- 4″, 246-pound 25-year-old rookie catcher named Riley Adams. That deal seems to be paying off for the Nationals. A weekend ago, Adams made his presence known in the top of the ninth in Atlanta by hitting a game-winning home run against the Braves. It was both his first-ever MLB homer and his first wearing a Washington Nationals uniform.

So, who is this catcher that the Nationals have acquired and catching people’s attention?

Adams was drafted his junior year of college in 2017 by the Toronto Blue Jays as a third-round pick. Adams played his college ball at the University of San Diego, where he had a batting average of .312 when he finished out his collegiate career. Before playing in Toronto, Adams spent four seasons in the minor leagues, where he accumulated 66 doubles, five triples, 28 home runs, 146 RBI’s, and eight stolen bases.

On June 8, Adams made his major league debut for the Toronto Blue Jays, and within two months, on July 29, he was traded to the Washington Nationals in exchange for the National’s closer, Brad Hand.

When that July 29 trade happened, the Nationals did not just pick up another catcher. The Nationals picked up a player who fit the Washington Nationals long-range strategy and fits manager Davey Martinez’s plan. The thing is, Adams brings a lot of positivity to the Nationals. If you look at his old American League East division, Adams faced off against teams known for winning championships like the Red Sox and Yankees. Adams is already very familiar with the Nationals local beltway rival, considering that the Toronto Blue Jays often faced off against the Orioles. He’s also played against a team that has been through the retooling process, the Tampa Bay Rays.

Adams is coming to a team where Davey Martinez has the final say on when the season is over. In a recent pre-game press conference, Davey Martinez made it very clear when he said, “We’re going to come here and compete. We played 12-13 games where we felt like we were in every game. So we’re going to come and compete, and as I said, it’s a Division that’s going to be wide open, I really believe that.” In last week’s series against the Mets, Adams made some impressive hits that showed Adams is here to compete with his fellow teammates.

Besides having an impressive swing and a great glove behind home plate, Adams being a catcher brings great chemistry to the clubhouse and one teammate in particular, pitcher Stephen Strasburg. Though currently shut down for the season, Strasburg attended San Diego State University, only 8 miles away from the University of San Diego. In contrast, I mentioned earlier, is where Adams attended school. We get to see Adams day in and day out doing his job regardless of who’s pitching, even though some pitchers have a preferred catcher. One thing fans should look out for in 2022 is a strong connection between Strasburg and Adams.

When you consider the scope of the full-scale Washington Nationals rebuild, Adams is a player that fits in perfectly. He has had just enough time in the minor leagues to get a taste of professional-level play and is now ready to further develop the Nationals into their style of play for many years to come.

In return, Adams has shown at the catcher position that he delivers motivational competitiveness and can make an impact in the National’s batting order. Though still too early to say with authority, he also seems to have great chemistry with all of the Nationals pitchers, positional players, and staff. I think every game Riley Adams catches is worth watching, especially focusing on how effective he works with a different pitcher and full complement from the bullpen each game.

Despite where the Nationals are in the current standings with no chance of post-season play, Adam’s performance and competitiveness demonstrate what the mantra of manager Davie Martinez means to “go 1-0 every day”.