Hall of Fame manager Tommy Lasorda, who led the Dodgers to two World Series titles in two decades at the helm in Los Angeles, passed away on Thursday. 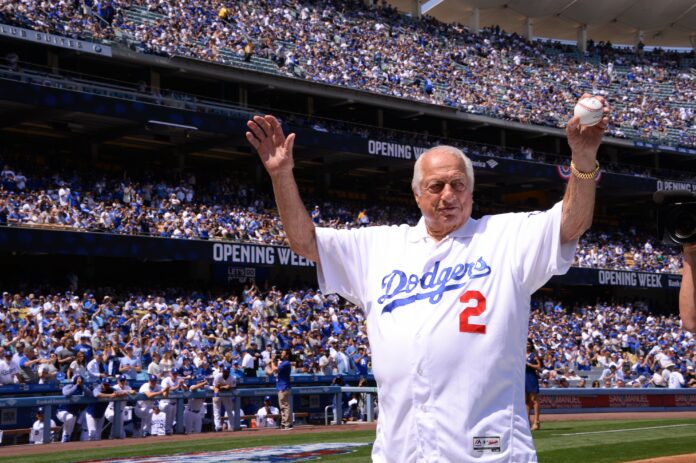 Friday afternoon, the Los Angels Dodgers announced that Hall of Fame and Baseball legend Tommy Lasorda passed away at 93.

The Hall of Fame Manager suffered sudden cardiopulmonary arrest at his home on Thursday and was taken to the hospital. He was pronounced dead later that day.

Lasorda was signed by the Phillies in 1945 as a left-handed pitcher and was later selected by the Brooklyn Dodgers in the minor league draft. He pitched in eight big league games for Brooklyn before being traded to Kansas City.

After the 1960 season, Lasorda retired from playin and became a scout for the Dodgers. He managed four games in the 1976 season before becoming the full-time manager in 1977 for the Dodgers.

Lasorda was named Vice-President of the Dodgers upon his retirement from managing in 1996. On June 22, 1998 he became the Dodgers interim General Manager upon the mid-season firing of Fred Claire.

The Hall of Fame manager has some interesting history with the team that the Washington Nationals replaced the Montreal Expos.

The Expos were hosting the Los Angeles Dodgers in what proved to be a chippy, low-scoring game.

In the top of the seventh inning, with the game scoreless and the teams arguing about a disputed call, Youppi! Clambered atop the visiting team’s dugout.

The clomp-clomp of his footsteps on the dugout’s metal roof was picked up on the game’s TV broadcast. So was Dodgers manager Tommy Lasorda’s reaction.

“Get the f–k off my dugout,” he could be heard shouting at Youppi!, before instructing some unseen person: “I don’t want him jumping on my dugout.”

Youppi! Dismounted and protested his innocence by tracing the shape of a halo over his head using one of his large, orange fingers.

Four scoreless innings later, with the game dragging on, Youppi! Changed into his pajamas and appeared to take a nap on the Dodgers’ dugout.

An article in the Montreal Gazette details what happens next: “Lasorda left his dugout and yelled in Youppi!’s direction. The third-base umpire then motioned for the mascot to leave the game.

The most common understanding of the incident is represented in the title of a 2017 Major League Baseball video: “Lasorda gets Youppi! tossed from the game.”

But Claude Hubert, who was playing the part of Youppi! that night, tells a different story version.

“The fans were making lots of noise on the dugout,” he explained to Télé-Québec’s Guylaine Tremblay in a 2017 interview.

“Dodgers coach Tommy Lasorda came out and the first thing he saw was me. I explained that it wasn’t me, it was the fans,” Hubert continued. “He understood, but the third-base umpire thought he was yelling at me, so he said ‘Youppi!, get out of the game.’ ”