Washington Nationals and BetMGM Announce Exclusive Multi-Year Partnership, along with a launch of mobile app and first-ever BetMGM Sportsbook connected to a stadium 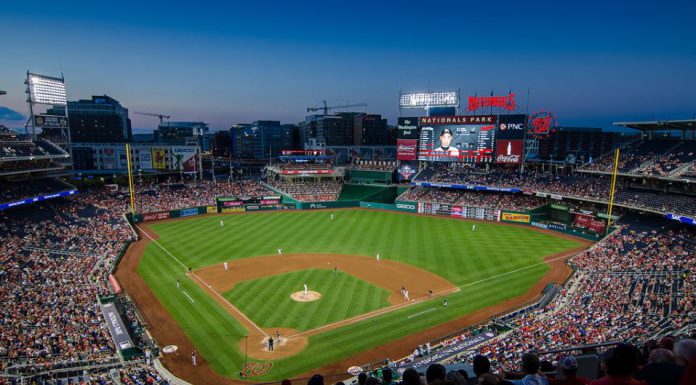 When fans finally return to South Capital Street and Nats Park, sports betting will be an option.

According to a Press Release, the Washington Nationals and BetMGM Announce Exclusive Multi-Year Partnership, along with a launch of a mobile app and first-ever BetMGM Sportsbook connected to a stadium.

According to the news release, the BetMGM sportsbook will be located where Center Field Social (across Center Field Plaza from the Nationals Team Store) resides. This will give fans a stadium view and sports betting experience that complements MGM National Harbor Dugout Club, a sports box located adjacent to the team’s dugout.

Interestingly, fans will not be able to access the sportsbook during Nationals games, but they can place bets on BetMGM’s mobile app, the news release said.

“The Nationals are thrilled to expand our strong partnership with MGM Resorts into the sports betting realm,” Alan Gottlieb, chief operating officer of Lerner Sports Group, owners of the Nationals, said in the release. “As our official sports betting partner, BetMGM will further enhance the greatest in-venue fan experience in Washington, D.C. through its state-of-the-art entertainment products and services.

“The BetMGM mobile app will enable our fans to engage with the game in new and exciting ways, while the BetMGM Sportsbook connected to Nationals Park will provide Nationals fans and the D.C. community with a first-class gathering place to celebrate their passion for sports together.”

Capitol One Arena in downtown Washington D.C. became the first sports venue to open a sportsbook on-site. It partnered with William Hill and opened in early August inside the arena in a temporary site.

William Hill’s retail sportsbook outpaces the D.C. Lottery’s sports betting app, and it can now be used near the arena — within a two-block radius around Capital One Arena. The D.C. Lottery went live with its GambetDC website at the end of May and followed with iOS and Android apps later in June.

FanDuel announced in late October that it would open a retail sportsbook at Audi Field, home of Major League Soccer’s D.C. United, as part of a multiyear partnership with the team. FanDuel will become the United’s exclusive sports betting sponsor.

The United and FanDuel said they hope to open the sportsbook in 2021, pending licensing and regulatory approvals from the D.C. Lottery.

MGM Resorts is also an Official Gaming Partner of Major League Baseball. In July, PointsBet became the first operator to deal with an MLB team, the Detroit Tigers.

“I can’t think of a better extension to MGM National Harbor’s long-standing partnership with the Washington Nationals,” Jorge Perez, president and chief operating officer of MGM National Harbor, said in the release. “Fans will have the opportunity to experience America’s pastime in the most innovative and exciting way possible.”

BetMGM’s branding will be featured inside Nationals Park as well as on the team’s social media and digital platforms, according to the release. BetMGM and the Nationals will also create exclusive benefits for members of each partner’s loyalty program.

Sign up
Previous articleTaking a closer look at the most recent Eugenio Suarez Rumor to the Nationals.
Next articleDeveloping: Naming Rights for the Astros and Nationals Spring Training Facility Change?
- Advertisement -
You Might Like