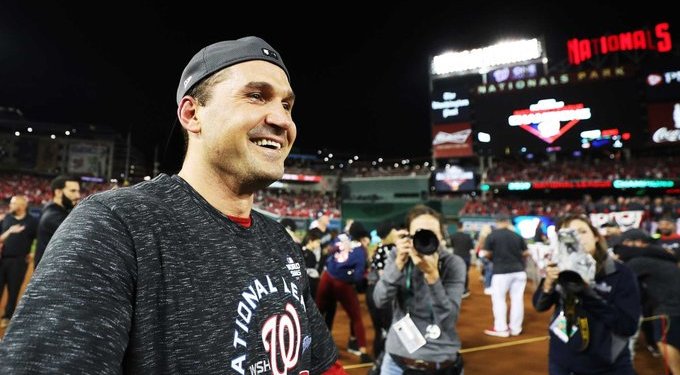 The Washington Nationals confirmed the signing of Ryan Zimmerman.

In 2019, Zimmerman hit .257 with nine doubles, six homers, 27 RBI, 17 walks and 20 runs scored in 52 games. He battled plantar fasciitis in his right foot, leading to two stints on the Injured List.

When he returned to the active roster for good on Sept. 1, Zimmerman hit .283 (15-for-53) with one double, three homers, 12 RBI, five walks and eight runs scored in 19 games during the month of September. He clubbed three home runs and 10 RBI in his first seven games back.

The Nationals now have 36 players on their 40-man roster. Please see attached document for an updated roster.

A day which pretty much seemed inevitable going all the way back to last year when Ryan Zimmerman opted out of the 2020 baseball season has come. Mr. National is returning to the nations capital.

Bob Nightengale from USA Today was the first to report the signing.

Zimmerman has been a part of every single important moment in Nationals history. This man opened Nationals Park with a massive walk off, hit big home runs in the postseason and even hit the first home run ever for the Nationals in the World Series. He has been here since day one, but 2021 will look a little different.

The days of being a go to at first base are over, however, with the signing of Josh Bell, the two of them will make a great platoon.

Zimmerman’s glove is still great at first base and makes up for when his arm lets him down. Even more importantly this man still kills left handed pitching which is something Josh Bell has struggled with.

“I fully plan on being back,” Zimmerman said in a Zoom conversation with Dr. Anthony Fauci last July. ”I’ve told my family and a bunch of close friends that I can’t go out like this.”

Zimmerman told the Washington Post’s Barry Svrluga in late September he missed being a part of the game and the competition that had been a part of his life for all those years.

In 2019 Zimmerman posted a slash line of 367/.415/.551 and had a 162 OPS+. Those numbers are even better than his career numbers against lefties which are great. Zimmerman will play his role in 2021 and give the fans one more chance to say goodbye to Mr. National, possibly for the last time.

We will be updating the article as more information becomes available.

Previous articleBreaking News: Hank Aaron Baseball Legend Passes Away at the Age of 86
Next articlePerspective: Is Cesar Hernandez Perfect for the Nationals?