HomePerspectivesThe Latest in the MASN Saga: Nationals Required to Fund Their Pre-... 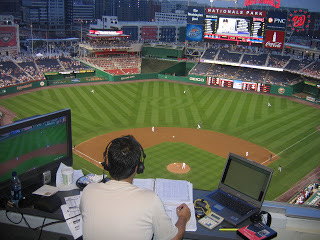 It might be time for Major League Baseball to step in and finally fix the MASN Saga once and for all.

According to Brittany Ghiroli from The Athletic, the Mid-Atlantic Sports Network, which broadcasts both the Washington Nationals and Baltimore Orioles, is in a bit of a financial crunch. The article states, “major cuts are coming to MASN,” most notably, “MASN is getting rid of its pregame and postgame coverage of both teams.”

In a letter that was sent to the Nationals on January 20th, sources told The Athletic that both “teams would have to individually fund their own pregame and postgame programming, which means talent salaries, truck rentals, rights fees and employing contractors for production, an amount that easily totals in the millions of dollars.”

It has been well documented that the creation of MASN in 2005 has caused major friction between the Learners, who own the Nationals, and the Orioles’ principal owner Peter Angelos.

When MLB decided they wanted to move the Montreal Expos to Washington DC in 2005, a major sticking point among other team owners was that the franchise was moving into the same media market as Baltimore and therefore, would decrease the Orioles’ revenue streams.

To appease Angelos’ concerns about a second team moving into the DMV area, MLB created MASN and gave a controlling interest of 90% of the network to the Orioles.  They then paid the Nationals $75 million along with the remaining 10% of MASN. The deal stipulated that the Nationals’ stake would increase by 1 percent every year, eventually topping out at 33 percent for Washington while the remaining two-thirds stayed with Baltimore.

The contract required the Orioles to pay the Nationals just $20 million, well below market value at the time, to broadcast the Nats’ inaugural 2005 season. That annual figure ended up bumping up to $25 million in 2007 and increased $1 million each year until 2012 — and every five years after that. In 2012, the two clubs were supposed to determine the Washington Nationals broadcasting rights’ fair market value. Since then, the two sides have been in what feels like a never-ending legal battle over ownership and fees on what the Nationals should be paid.

According to a ruling upheld by the New York Appeals court this past October, MASN currently owes the Washington Nationals $100 million in broadcasting fees.

Enter the latest report from The Athletic.

If you take a look at the report without the lense of MASN owing the Washington Nationals a significant amount, it is fair for a station to ask a team to cover the costs. However, many teams either own the television stations that broadcast their games or at least a majority share. But this isn’t the case with the Nationals.

Since MASN owes the Nationals a significant amount of money, there shouldn’t even be a discussion or ask for the Washington Nationals to pay for their pregame and postgame coverage.

Adding insult to injury, according to Steve Mears from TalkNats.com, “a Nats fan group on Facebook early yesterday had a poster claim that Bo Porter, Dan Kolko, and Alex Chappel were all terminated. Maybe that is untrue at the moment, but the outlook is gloomy for the MASN pregame and postgame shows.” Although this could be just more “fake news” from the social media giant, It became more believable with MASN already deciding to part ways with Orioles broadcasters Gary Thorne and Jim Hunter.

After laying all the facts out, it might be time for Major League Baseball to lower the hammer on Baltimore’s ownership and make them settle this dispute.

There are many ways Major League Baseball can force the Orioles to fix this mess, and all options should be on the table, from never hosting an All-Star Game until their debt to the Nationals is repaid to loss of future draft picks. The most recent report from The Athletic should serve as a wake-up call for the Learners and Major League Baseball.

The only solution that makes sense would be the Washington Nationals setting up their own TV network that would broadcast Nationals home and away games. This network gives Washington the ability to sell ads on the station and adds the needed revenue stream that they have been lacking. The Nationals should then hire the same familiar faces that fans around the DMV have come to rely on for their in-game broadcasts and pre- and post-game coverage.

The bottom line is that recent reports of MASN charging Washington to broadcast pre- and post- game programming while owing the Nationals a substantial amount of money is ridiculous. It is time for Major League Baseball to set up a better TV experience for the fans in the Washington D.C. area. One that they deserve as fans of one of the most competitive teams in baseball for the last decade.