During the 2020 season, a strained groin could explain why Carter Kieboom did not perform well during the season. 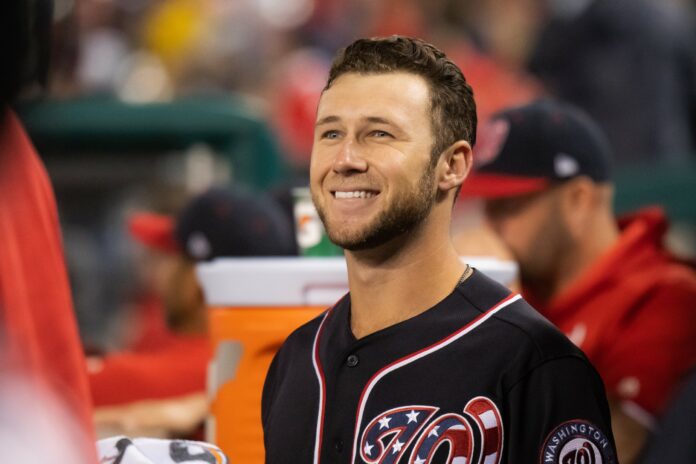 Steven Mears from TalkNats.com (Twitter link) broke some news, stating that according to “A #Nats source told us on a condition of anonymity that Carter Kieboom played on what was thought to be a strained groin during the 2020 season and it turned out he was playing with a GROIN TEAR which explains the lack of power, hitting struggles, issues running, etc.”

TalkNats.com stated: “It was known that Carter Kieboom had a groin strain as the 2020 season opened from a report from Jesse Dougherty of the Washington Post. But the report also said, ‘the injury evidently only hurts when he moves laterally, so he’ll be able to hit and run the bases.‘”

Did the Washington Nationals mis-diagnosed the severity of the injury?

Mears followed up on this tweet by saying that “Carter is 100% healthy now per the source. Expect him to be a new kid in Spring Training.”

While we have no reason not to believe Steven Mears from Talk Nats.com, if true, this would explain a lot about Kieboom’s lack of performance during the shortened 2020 Major League Baseball Season. It would also explain why Mike Rizzo and Dave Martinez have confidence in Keiboom’s upcoming season abilities.

(See Related Article: “The Carter Kieboom Dilemma: Is Kieboom the Long Term Answer at Third Base?)

According to WebMD.com, “A groin pull — or groin strain — results from putting too much stress on muscles in your groin and thigh. If these muscles are tensed too forcefully or too suddenly, they can get over-stretched or torn.

Groin pulls are often divided into three degrees of severity:

During the 2020 season, according to stats provided by Baseball Reference.com, Kieboom’s performance was lackluster. Kieboom had only 99 at-bats, which only yielded 20 hits, no home runs, nine RBI’s, and a Batting average of .202, and a slugging percentage of .212

His 2020 performance raised serious doubts among many observers of Kieboom’s hitting performance and as a prospect. However, both Rizzo and Dave Martinez have publically shown their confidence in Kieboom; this could be why. In an end of the year press conference Dave Martinez said: “I talked to him, and I told him, “Hey, you’re our future third baseman, and the future is now. So you’ve got to come to spring training, be ready to go and the job is yours, but you’ve got to earn it, He knows that. Moving forward, hopefully he comes to spring training ready to go.”

In September of 2020, Carter Kieboom underwent X-rays to address swelling in his contused left hand, and afterward, his season ended.

Stay tuned to the Nats Report as hopefully more information comes to light.

Sign up
Previous articleLeague News: Negro League 101: A New Educational initiative
Next articleThe Morning Briefing: How Hurt Was Carter Kieboom During the 2020 Season?
- Advertisement -
You Might Like