Notes and reports from the Washington Nationals Spring Training in West Palm Beach, FL for the 2021 season 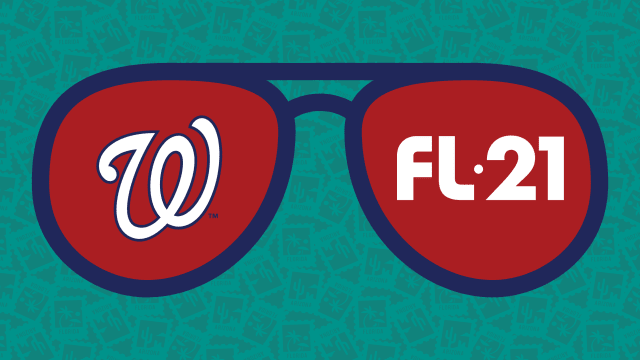 Make sure that you bookmark this page as we will be updating this page throughout Spring Training 2021 from West Palm Beach, FL.

Update 12:00 pm EST: This afternoon there are reports per Dave Martinez that Erick Fedde will start Sunday in the Nationals’ first spring training exhibition (against the Cardinals in Jupiter). Fedde was ready and Dave Martinez says WSH is easing in Max Scherzer (ankle), Stephen Strasburg (coming off surgery) and Joe Ross (coming off an opt out in 2020).

Sunny, with a high near 80. Light east wind increasing to 5 to 10 mph in the morning.

Baseball will be played this WEEKEND!

Well, the wait is almost over, Nationals Fans; we only have three more days until the Washington Nationals will face off against the St. Louis Cardinals at 1:05 pm EST at Roger Dean Chevrolet Stadium in Jupiter, Florida.

The game will not be broadcasted on MASN Sports, so Nationals fans will have to tune to Twitter and beat reporters at the game for the latest game information. We wil let you know if anything changes. You can watch the game on Fox Sports Midwest per Frank at Nationals Source

Don’t forget to head to our Spring Training Page during the day, where we give updates on the latest news coming out of West Palm Beach, FL, including a Picture of the Day!

A couple of letters missing from the schedule: MASN…

Nats Fans will have to wait till Monday to see some baseball action on Nationals.com

We talked about some of the offseason signings, what it is like down at Spring Training this year, and much more!

Make sure that you add us to your podcast feed so that you will be notified when we publish a brand new episode.

Pictures of the Day

Sunny, with a high near 81. Light and variable wind becoming northeast 5 to 9 mph in the morning.

I had never seen him before then, but all I can say is for my first time seeing him and how he looked against hitters today, he looked very good. Fastball’s coming out great. His slider, curveball … he looks very sharp right now. I’m glad I got to see a guy like him today, for first day. A guy who knows what he’s doing. He is who he is for a reason, and he’s got it.” – Washington Nationals third baseman Carter Kieboom on LHP Brad Hand.

The Washington Nationals Announced their Radio Schedule for Spring Training

Yesterday, for the first time this spring, all 72 players in the Nationals Spring Training were on the field and participating. Only two pitchers who had yet to participate were cleared to join their teammates: Javy Guerra and recently acquired Jeremey Jeffress, Guerra, who had been in Arizona with his wife as she gave birth to a baby, arrived in West Palm, FL, on Monday. On Tuesday, he cleared his mandatory intake testing.

Additional good news from Spring Training, Max Scherzer took another important step in returning from a pre-Spring Training injury. According to Mark Zuckerman of MASN Sports, Scherzer threw 40 pitches off a mound at 80 to 85 percent velocity.

Later in a Zoom call with Reporters, Manager Davey Martinez talked about Scherzer’s status: “[Scherzer] came off the mound and he said he felt fine. The ankle didn’t bother him at all…. No complaints, no issues.”

Lastly, yesterday was the first time batters had a chance to take some live batting practice.

According to multiple reports, center fielder Victor Robles appeared to have “slimmed down” from his 2020 weight. I guess the COVID-19 was real. Even Martinez mentioned it during the Zoom call. “He slimmed down a little bit. His footwork has been good in the outfield. He revamped his swing a little bit; he’s a little shorter to the baseball. So far everything looks good. I just want him to stay healthy, want to get him into games and get him playing again. As we all know, the upside with Victor is unbelievable. We want to get him back to that Gold Glove status and continue to develop.”

Hang on, folks, because the 24-game Grapefruit League schedule kicks off this Sunday!

Pictures of the Day

Spring Training Quote of the Day

“I would love to play here my entire career… I’ve said it in the past — I’ve always liked it here and don’t think the grass is greener on the other side necessarily, but it’s a business, and things change. But as of right now, I would love to play here for my entire career. Those talks have happened in the past and hopefully, they’ll happen in the future but as of right now, we’re taking it day by day, I guess….” Trea Turner on a Zoom Call yesterday talking about staying in Washington D.C.

Yesterday, Turner in a Zoom Call expressed his want to be a Washington Nationals’ player for life, saying: “I would love to play here my entire career, I’ve always liked it here and don’t think the grass is greener on the other side necessarily, but it’s a business and things change. But as of right now, I would love to play here for my entire career.”

Steve Mears from TalkNats.com has a great article on this very topic that is worth your time to read. From the article: “With a seventh place finish in the 2020 NL MVP voting, Turner really raised his stock price. Some have said a 59-game season like 2020 cannot be relied on, but if you look at Turner’s 2019 season after he returned to the team in May, recovering from broken fingers, the team’s resurgence was at the same time that Turner put up a slash of .306 /.363/ .509/ .871 from May 28 to the end of that championship season.”

Last week, Frank wrote an article for us titled: “What Does a Trea Turner Extension Look Like?” In light of this news coming out of Spring Training, you should re-read the article.

A chance of showers before 11am, then a slight chance of showers after 3pm. Partly sunny, with a high near 78. West wind 7 to 14 mph becoming north in the afternoon. Winds could gust as high as 18 mph. Chance of precipitation is 40%.

Spring Training Quote of the Day

The guy takes the ball every day. He’s a competitor. … We felt like he got back to that for like he was when he was an All-Star.” – Washington Nationals Manager Dave Martinez on Jeremy Jeffress

With RHP Jeremey Jeffress’s signing, the Washington Nationals bullpen becomes a sign of strength after years of hoping and praying.

In a way, it’s refreshing to start Spring Training with a bullpen full of experienced closers and relievers that actually might perform. At the start of the past few seasons, Nationals fans have had to hold their breath and pray that the offense got enough runs in the early part of the game to withstand a potential meltdown when the starting pitcher was pulled.

Read the full article on The Nats Report.

A chance of showers, with thunderstorms also possible after 1pm. Mostly sunny, with a high near 79. Breezy, with a south wind 14 to 17 mph, with gusts as high as 26 mph. Chance of precipitation is 40%.

Spring Training Quote of the Day:

“I don’t really try to look back too far to say what happened, but obviously, I’ve been throwing a baseball for a long time, and it’s that injury is from repetitive use, and I was just happy to go in and it’s like a 15-minute procedure and I wake up and even though I was all bandaged up, the numbness in my thumb just went away.” – Stephen Strasburg discussing his 2020 injury and looking to the future.

Mark Zuckerrman from MASN Sports Washington writes an interesting article about how after an injury wiped out his 2020 season, Strasburg is healthy and determined. From the article: “Some six months later, Strasburg’s body is completely fixed. He said the numbness disappeared almost immediately after the surgery. He was throwing again in November. And early in January, a few weeks earlier than normal, he climbed a bullpen mound for the first time to throw fastballs.”

Click here to read the full article via MASN Sports

Today’s weather in West Palm Beach, according to the National Weather Service:

According to Mark Zuckerman of MASN Sports Washington, the Nationals pitchers who have thrown off the bullpen mound this morning are Austin Voth, Wander Suero, Will Harris, Kyle Finnegan and Dakota Bacus. Everyone who wants a roster spot has thrown off the mound over the past three days.

Davey Martinez said Javy Guerra has not arrived at Spring Training yet because his wife is pregnant. He is scheduled to arrive on Monday.

This afternoon, various pitchers were made available to reporters via Zoom from West Palm Beach. Here are a couple of tidbits from the calls.

Max Scherzer and Patrick Corbin spoke highly of pitching to new Washington Nationals catcher Alexander Avila. The 33-year-old Avila has played in Major League Baseball for five different organizations, including the Detroit Tigers, Chicago White Sox, Chicago Cubs, Arizona Diamondbacks and Minnesota Twins. Avila previously caught Scherzer with the Tigers from 2010-15 and caught Corbin with the Diamondbacks during the 2018 season.

Patrick Corbin has been in West Palm Beach, FL all winter long, but also traveling and spending time in very cold Syracuse, New York weather. Corbin discussed how many pitchers, including himself, didn’t feel too great last season after the shortened summer ramp-up. The veteran starter has been throwing since December 1st and believes that a full Spring Training will make a big difference.

Per Mark Zuckerman of MASN Sports Washington, Max Scherzer discussed if fans should be allowed back into the stadiums this summer. Scherzer believes that they should “100%” and he stressed his belief that some number of fans should be allowed to attend games to begin the 2021 season. Scherzer also discussed the severity of the ankle sprain he suffered while working out recently, saying that it isn’t serious. He also stated that his arm feels great and expects to resume throwing off the mound soon. Lastly, Scherzer addressed the fact that his seven year contract is coming to end. He said: “it’s hard to believe how much time has passed. But not going to worry about what happens next,  and that stuff takes care of itself.”

Here are some quick headlines from Reporters who are at Spring Training:

We will upadate this article as more information and the transcript becomes avialbale.

Here are some highlights

Sign up
Previous articleWhat should the Nationals Do with the 5th Pitching Spot in the Rotation?
Next articleHow the Tatis Deal Impacts the Nationals & More Importantly Juan Soto
- Advertisement -
You Might Like