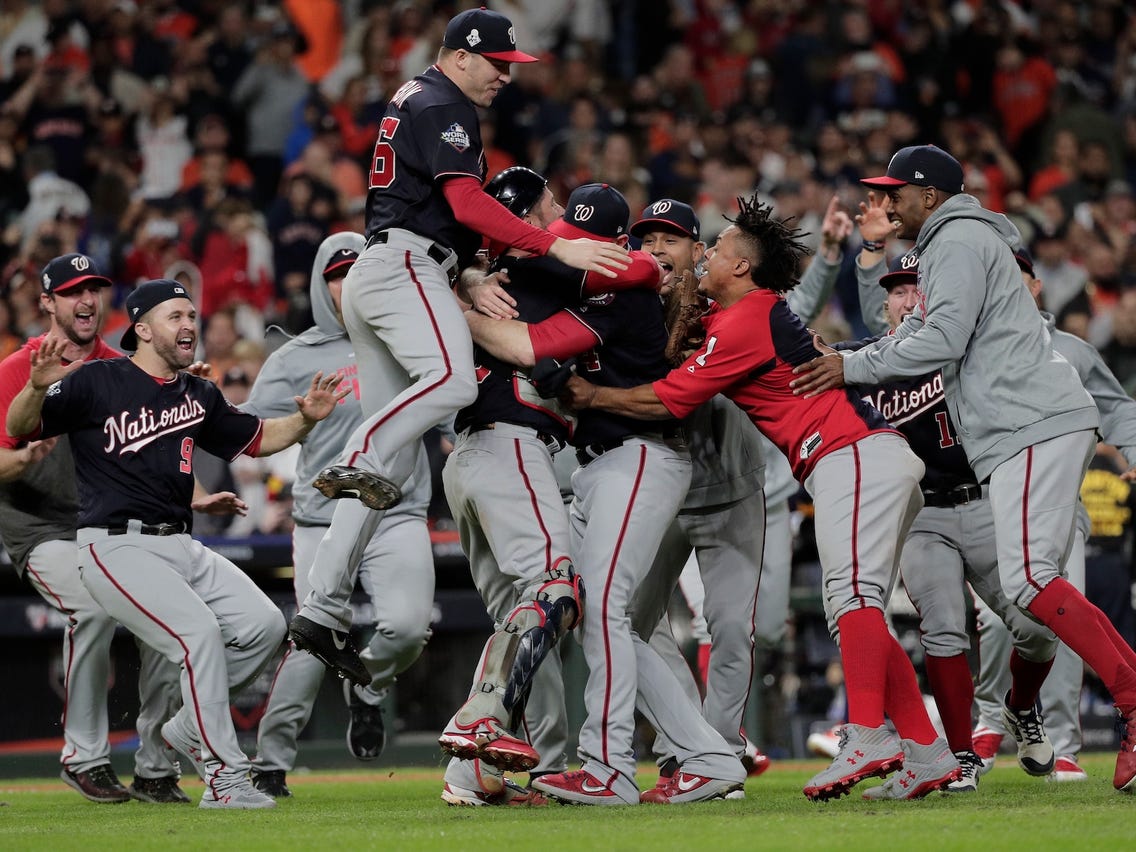 The 2019 Washington Nationals: A Team Of Destiny

The 2019 Washington Nationals were a team of destiny no matter how you look at it.

Whatever slogan you want to use to describe the 2019 Washington Nationals, there is one slogan that I am going to add: “A Team of Destiny.” I have resisted the urge to write about the 2019 Washington Nationals, mainly because I wanted to keep my emotions about the season close to my vest. After watching now two documentaries about the 2019 Nationals (the MLB produced a documentary, and the Curly W production: “Improbable”). I really can’t hold it in anymore. I might be late to the game here; however, it’s time to share my thoughts and feelings.

Before I get to the 2019 MLB season, I would like to share some personal moments with you. Growing up in Long Island, NY, having professional teams winning championships is somewhat regular. However, I was just four years old when the New York Mets won the World Series. I was a New York Met fan growing up and attending many many games at Shea Stadium. It wasn’t until 1994 that I started to watch and enjoy professional hockey, which happened to be the year that the New York Rangers won the Stanly Cup.

I was 12 years old and was young to understand what it meant truly, but I do remember being extremely happy that my team, the team that I stayed awake to watch countless games that season and playoff games, was the Stanley Cup Winner. I got it and boy did I enjoy it.

I played little league, middle school, and high school baseball ( I wore #7 and was the captain of the bench players!), so I will say that winning, especially it all, wasn’t something that I was accustomed too. During the summer, I attended sleep away camp in upstate New York, where I never won anything. Let’s say that winning feeling wasn’t something that I was accustomed too. Fast forward to moving to Washington, D.C., in 2005, which also happened to be the first year of the Washington Nationals, and that’s where this story for me starts.

When I moved to D.C. in 2005, I hadn’t rooted for a baseball team in years and hadn’t attended one in decades, so it was natural for me to adopt the Nationals as my new home team. Heck, they wore a curly W. (it is the initial of my last name.) I got into the hype and went out to purchase a Curly W baseball hat and some gear.

The Time has Come to Celebrate

Fifteen years later, four playoff series losses all in heartbreaking fashion, Bryce Harper no longer in Washington, the 2019 baseball season started in a heartbreak fashion with a bad opening day loss to the New York Mets, the bullpen in horrible shape, many players hurt and with a record of 19-31 on May 24, 2019. Let’s say 2019 was turning out to be an awful year.

Truthfully, as the summer started to play out, I was a bit surprised to see a team come together like the 2019 Nationals. Players ego’s aside, like me, all Nationals fans saw the team coming together, scratching back to Wild Card contention only by July 4th and then in late September clinch a Wild Card berth against Bryce Harper‘s new club: The Philadelphia Phillies. One month later, the Nationals were sitting on top of the Baseball world holding the Commissioner trophy in Houston, Texas.

The way that the 2019 Washington Nationals responded to adversity was just incredible, and something that makes me have chills down my back, I believe, is why this team was unique and relatable to everyone. Everyone has had struggles in their lives, been kicked down, or didn’t believe in themselves; this year’s team makes you believe. It made me believe that anything is possible.

There wasn’t one player on the team that didn’t contribute to the success of the group, and everyone on that team contributed to the success of reaching and winning the World Series. I think that in years prior, there was always a “me” first thinking (at least from observing from afar), and maybe that is why previous Nationals teams didn’t overcome and didn’t win when it mattered the most.

From watching 𝙄𝙈𝙋𝙍𝙊𝘽𝘼𝘽𝙇𝙀 over the past two days, I am genuinely reminded about all the amazing personalities and just what seems like genuine appreciation for each other. That is what makes the 2019 Washington Nationals a team of Destiny.

Don’t forget to “Go 1-0” and “Finish the Fight” because the Washington Nationals surely did in 2019.

Next articleThe Day That Should Have Been: Opening Day At Nationals Park 2020

Perspective: The Months of June and July are going to be the Most Important Two Months for the Washington Nationals in a long time.

Perspective: Is 2021 Erick Fedde For Real?

Where has the 2019 Patrick Corbin gone? Or was it ever there?