We finally have real baseball to write about and its a good story: The Nats went 1-0 Today! 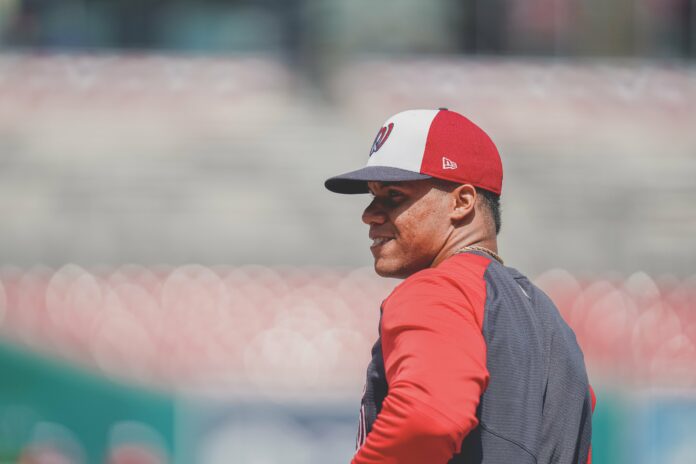 We finally have a game to write about, and boy, was it a good one. The Nationals ended up walking off the Atlanta Braves on a Juan Soto RBI Line drive!

In a day that started bad with a first-pitch home run by Ronald Acuña Jr off Max Scherzer, three hours later, it ended with a 3-0 line-drive RBI off of Juan Soto to secure a walk-off win and the Nationals being undefeated so far in the 2021 season.

Here are some brief notes from today’s game:

Excited Max Scherzer isn’t great: As much as I love his intensity all the time, I think that sometimes it gets the best of him; it seems to be the case in the first two innings of today’s game. On the first pitch of the 2021 season, Ronald Acuña Jr. blasted a home run into the LF bullpen. Scherzer would give up home runs to the NL MVP Freddie Freman, Dansby Swanson, and then another Acuña Jr bomb. Today was the third consecutive Opening Day in which Max Scherzer has given up a first-inning homer: 2019: Robinson Cano 2020: Giancarlo Stanton 2021: Ronald Acuña Jr. and Freddie Freeman.

Once Scherzer settled down, he retired 12-of-13 Braves, striking out six, and the Nats ended up tying the game. Scherzer ended up striking out nine over six innings, giving up five hits, four runs, 0 walks. Scherzer threw 91 pitches; 60 of those pitches were strikes.

Welcome to the New Kid on the Block: Jonathan Lucroy

It will be interesting to see how Dave Martinez will use Lucory moving forward when Gomes and Alex Avila return from COVID-19 protocols. One can make a quick argument that maybe the new platoon behind home plate should be Gomes and Lucroy. (More on that later in the week on the site)

Lucky #7 Trea Turner: After dealing with some COVID-19 issues over the past three days, it was great to see Trea Turner play in today’s game. Turner ended up starting at shortstop and had the first home run for the 2021 Washington Nationals season in the bottom of the third inning. Turner ended up going 4-1 with two RBI’s. Turner hot hit by a p

Now Leading Off Victor Robles: Moving Victor Robles up in the lineup was such a great idea by Dave Martinez. Robles was on fire during Spring Training, and it continued to show during today’s game. Robles went 3-1 and was the winning run in the bottom of the ninth inning.

Andrew Stevenson: One of the players that stood out towards the end of last year was outfielder Andrew Stevenson, and he picked up right where he left. In today’s game, Stevenson went 4-2 with one RBI and one hit. Stevensons’ sole RBI came in the bottom of the eighth inning with the Nationals down by one.

Juan Soto: Having the game-winning line-drive RBI is a great way to start the 2021 season. During the game, Soto looked off-balance, and it wasn’t until the bottom of the ninth that everything came together for the young Superstar. Honestly, there is something that this kid brings to the plate every time he steps into the batter box. Maybe it fitted that (hopefully) Soto, the new face of the franchise, had the game-winner as fans returned to the stadium for the first time since the magical 2019 year. Just maybe it makes sense that the only other player in Washington Nationals history to hit a walk-off for the Nationals on Opening Day since moving to Washington D.C. in 2005 was the former “face of the franchise,” Ryan Zimmerman in 2008.

(Related Article: Perspective: Juan Soto Should Be A Washington Nationals For Life)

Will this be something that Nationals fans can be accustomed to for years to come? Or at least this year? Only time will tell.

Buckle up. It’s going to be a great season! Oh, and the Nationals went 1-0 today!