We finally have baseball games to write about! Here is our preview for the Atlanta Braves Series. 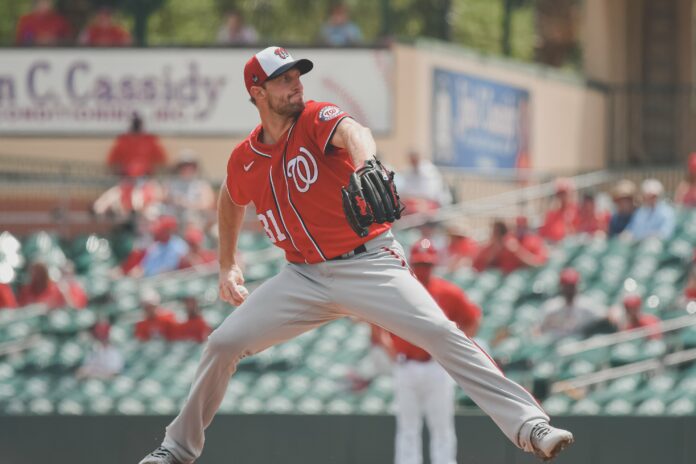 After the postponement of three games against the New York Mets because of COVID-19, the Washington Nationals will host the Atlanta Braves for a three-game set here in Washington D.C.

As we previously documented, the series was scheduled to start on Monday, April 5, 2021, but Major League Baseball, the Washington Nationals, and other relevant organizations decided to air on the side of caution and postpone Monday’s series opener. The series will now open on Tuesday afternoon and conclude with a single-admission doubleheader on Wednesday afternoon, April 7, 2021

Let’s take a look at the projected pitching matchups for the series against the Atlanta Braves.

Two-time CY-young award winner Max Scherzer will take the mound for the Washington Nationals in the season opener in Washington D.C. Scherzer will face a struggling Braves offense that managed just three runs while getting swept by the Phillies in a three-game series over the weekend. Despite these early struggles, the Braves lineup features the reigning National League MVP: Freddie Freeman, and two other NL MVP Candidates in Ronald Acuna and Marcell Ozuna. Scherzer will take the ball on Opening Day for the sixth time in seven seasons with the Nationals. Scherzer is coming off a 2020 season in which he posted a 3.74 ERA and a 5-4 record, his 11th straight above-.500 season.

Scherzer has faced batters in the current Atlanta lineup 273 times since 2015. Over that stretch, he has a strikeout rate of 28.2% while holding these hittiers to a 0.242 average.

Tuesday’s game will also mark the first time the Nationals will be playing in front of fans at Nationals Park since Game 5 of the 2019 World Series.

Recently acquired, Drew Smyly will take the mound against the Washington Nationals on Tuesday afternoon. The Atlanta Braves took an $11 million gamble on the veteran lefty,  who lasted five innings in just two of his five starts in 2020. Smyly has only faced current Washington Nationals batters a total of 40 times in his career, but the Nats have been successful in this small sample size, hitting .389 against the southpaw.

In a Zoom press conference with reporters on Monday afternoon, Manager Dave Martinez stated that newly-acquired catcher Jonathan Lucroy would get the start behind the plate, catching Max Scherzer. The Nationals are waiting for results from Lucroy’s PCR test, which is mandatory. According to the Cleveland Clinic, a PCR test is the most accurate and reliable test for diagnosing COVID-19. Additionally, Martinez said that the two of them have already been in touch on the phone.

At second base, we will see Luis García play the position tomorrow, according to Dave Martinez.

While the Nationals haven’t officially announced the starter for the second game of the 2021 season and the first game of the doubleheader, one would assume that the 2019 World Series MVP and right-handed pitcher Stephen Strasburg will get the call. Strasburg only pitched in two games in the 2020 season, but had a banner year in 2019, when he went 18-6 with a  3.32 ERA in 209.0 innings over 33 appearances. During the 2019 postseason, Strasburg didn’t lose one game when he started and went 2-0 during the World Series against the Houston Astros. Strasburg only gave up a total of nine runs during the postseason.

RHP Huascar Ynoa is scheduled to make his second appearance of the 2021 season on Wednesday against the Nationals. Ynoa pitched a scoreless inning of relief in the Braves loss to the Phillies on Saturday. During Spring Training, Ynoa went 1-2 and posted a 7.79 ERA in six appearances.

The Washington Nationals will play a double hitter against the Atlanta Braves. We know from Dave Martinez that Stephen Strasburg will pitch in one of the two games on Wednesday. Let’s assume that Strasburg starts in the afternoon game, leaving either Joe Ross, Austin Voth, and Erick Fedde to pitch in one of the Wednesday games.

It isn’t likely that Patrick Corbin will pitch in one of the games because he did not appear in the team workouts at Nats Park on Monday.