The Curious Case of Erick Fedde

by Brandon
in All News, Featured, Perspectives
Reading Time: 4 mins read
A A
0

Due to COVID protocols, the Nationals were scheduled to play a doubleheader against the Atlanta Braves on Wednesday to close out their first series. After taking the home opener on Tuesday with a depleted roster, the Nationals wanted nothing more than to compete with the Braves and not blow through their bullpen in the first game of the doubleheader.

Forced into duty due to both Patrick Corbin and Jon Lester being unavailable, RHP Erick Fedde took the mound for the Nationals in Game 1.

Unfortunately, things did not go according to plan. Fedde only gave the Nationals 1 2/3 innings today, surrendering six runs on six hits, while walking three batters and only striking out one. His ERA for the outing was 27.00.

This is not to say that Fedde is horrible or the worst pitcher ever. The former first-round pick has pitched well at times, but, with Fedde out of minor-league options, it is time to look at different numbers and see what possibilities are available for his Nationals career to either continue or end.

Traveling back to just a few weeks ago in Spring Training, Fedde got two starts and posted a 5.19 ERA. He gave up five earned runs on 10 hits while walking five batters. Not amazing nor horrific, especially considering that this is Spring Training and guys use this period to prepare their bodies for the grind of the 162 games that lie ahead of them.

However, looking at Fedde’s overall career numbers, we see that these Spring Training numbers do not seem like an outlier at all. Throughout his career as a starter (166 IP), Fedde has amassed an ERA of 5.37 while giving up 33 home runs. Opponents have a career .291 batting average according to FanGraphs. In his 34 starts, Fedde was 7-10 with 17 No Decisions. According to Baseball Reference, out of his seven career victories, four of them were deemed “non-quality wins” (<6IP and more than 3 ERs). He has also only recorded seven quality starts out of those 34, which is 10% lower than the league average of 39%. 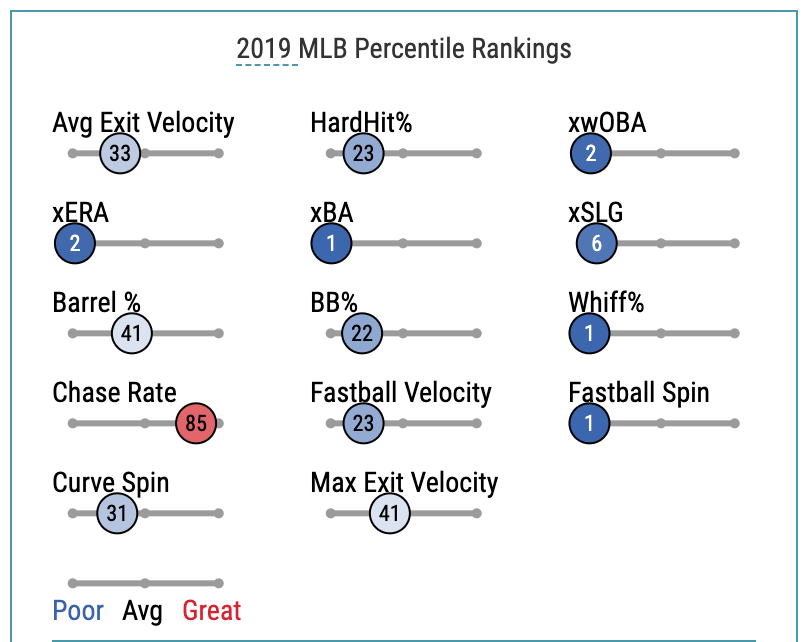 Above is a chart from Baseball Savant, showing Erick Fedde’s Percentile Rankings among Major League pitchers during the 2019 season, when he had a career-high in pitches thrown. He has a below average to poor rating in every single category except for “Chase Rate”, not ideal for a starting pitcher. Also from this site, his “Exit Velocity” in 2020 was 89.3 MPH while the league average was almost 2 mph slower at 87.7 MPH.

(Related Article: Perspective: Has Joe Ross Pitched his way to the Fifth Spot of the Washington Nationals Rotation?)

Now, let us look at Erick Fedde the reliever. In his career, he has made 32 relief appearances, pitching to a 3.54 ERA in 28 innings. According to FanGraphs, in those outing, he has held opposing hitters to a .201 average while only giving up one home run. Now the leverage of his relief appearances has not been remarkably high, with a rating of .845 where 1.0 is average (baseball-reference). These numbers give me hope with what situations and scenarios Fedde could eventually thrive in.

There are many options with a player that is seemingly underperforming, starting with a trade. One would think this would be a sell-low spot for Fedde and would not net the Nationals much in return. For that reason, I believe that option should be tabled for now. I also do not believe Fedde should be a full-time starter anymore due to the career numbers he has posted.

My best suggestion for him is some form of a long relief role out of the bullpen or even a spot starter/opener if the Nationals need this. Given his performance from the pen already, he could be eased into higher leverage spots, giving him more chances to succeed without having him exposed to multiple lineup turnovers per game. In theory this should maximize his ability for the Nationals, but it remains to be seen what Mike Rizzo and Co. will put into practice.

The Morning Briefing: Nats Get Swept in the Doubleheader; head to LA

Quick Notes: Phillies-Nationals Saturday doubleheader will move to Friday due to Hurricane Ian per the Athletic

Game Preview: The Washington Nationals look to avoid a sweep by the Atlanta Braves

Quick Notes: Lane Thomas’s future with the Nationals seems to be in the outfield

No Result
View All Result