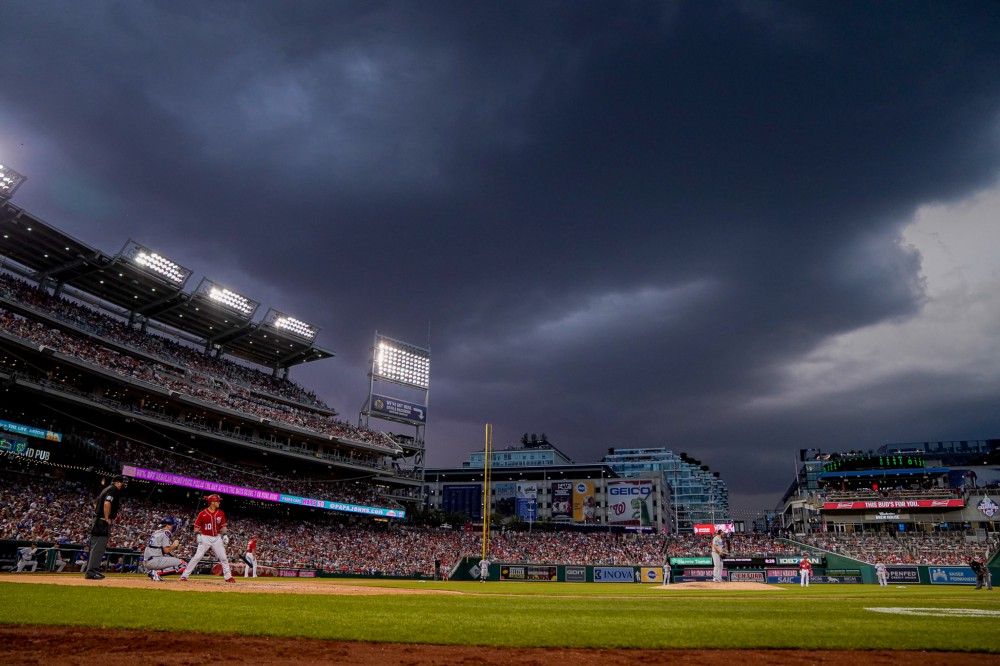 The Banged up Washington Nationals Get Swept by the LA Dodgers

A weekend full of promise ends badly as the Nationals get swept by the Dodgers and now head to the West before the All-Star Break.

Well, that wasn’t a fun weekend at all if you are a Washington Nationals fan. Between the rain delays and the injuries piling up for the Nationals the weekend series that began with the Nationals only two games behind the Mets turned into a weekend sweep by the very talented Los Angeles Dodgers. Now Nats fans can only hope that the best outcome that could occur is that the Nationals end the July fourth weekend only four games back from the Mets. Hopefully, the Yankees can help the Nationals out.

If you had to boil down the series into two themes they would include: Injuries and the Bullpen Collapses and both these storylines are connected to each other.

I honestly think that if the Nationals bullpen didn’t have some epic collapses during this series, (mainly on Friday night and possibly Saturday) the Nationals could have at least split the series or even maybe won the series, however, “what ifs” don’t count in the standings. I will get back to the bullpen in a second, let’s talk about the Injuries.

I am aware that injuries are going to occur for any baseball team during the season, look at the New York Mets, and there seem to be more injuries occurring in MLB, but for some reason, it feels that the Nationals tend to have a lot of injuries, or it could be that the Nationals need every player on their roster to be healthy for the team to be successful during the year.

Either way, without some key players this weekend such as Trea Turner (who is still day-to-day with an injury to his finger), June’s NL Player of the month: Kyle Schwarber (who knows right now how long he is going to be out), and in the bullpen having Taniey Raniey and some other key relievers out on the IL the Nats weren’t able to overcome a very powerful Dodger lineup.

Over the course of the series, the Nationals were only able to get 24 hits compared to the Dodgers’ 39 hits over the four-game series.

Additionally, the very fact that PITCHER Jon Lester had to pitch a hit twice during the series should tell you everything about the Nationals’ depth in the infield and outfield.  No matter what the outcome of this season is, this is something that the Nationals need to address during the offseason either via off-season signings or during this year’s MLB amateur draft. The Nationals need to start to develop talent that is not just pitchers.

“It’s unfortunate we have so many injuries,” Martinez said during his postgame Zoom session with reporters. “But in this game, it happens. We’ve got to keep going, got to keep battling. We’ve got to find a way, kind of will it some days. We’ll show up in San Diego tomorrow and we’ll compete again.”

Developing and having prospects or consistent backups is key to the success of any sort of baseball team at this level. As much as I agree with what Mike Rizzo has done over the course of the past three seasons, this is a critical gap that was missed and a huge failure in the leadership of the Nationals.

The recent injuries of late-inning pitchers of Daniel Hudson, Tanner Rainey, and Kyle Finnegan left Martinez with a bullpen that included only one late-inning reliever he trusted and Brad Hand and he wasn’t too afraid to use Hand when necessary. The question that we need to ask, on Friday night when the Nationals up by one run entering the seventh inning why wasn’t Brad Hand asked to come in the game. Instead, Martinez went with a reliever who had a 27.00 ERA at the time to hold a very close game.

What makes this storyline a bit hard to swallow is that going into this season, many thought, including me, that the Nationals bullpen was going to be a strength of the team this year. It is turning out that due to injuries the Bullpen has once again become a problem for the Nationals.

Before the Washington Nationals relievers came in, the total number of runs given up by Serchzer, Ross, Corbin, and Espino was only 11 runs out of the 26 runs that the Dodgers were able to score during the four-game series.

Here is the breakdown for the starting pitchers:

While the Thursday and Saturday games were either canceled early or delayed, the game on Friday night where Scherzer had another amazing performance was the most disappointing. Besides a rough first inning, Scherzer settled down on Friday night and only gave up one run on four hits over six innings pitched. It was pretty impressive, considering that this is only the second start for Scherzer after coming off the IL list. In addition to limiting the powerful Dodger offense, Scherzer struck out a total of eight LA Dodgers during his outing.

It wasn’t until Scherzer was pulled in between the sixth and seventh inning that things unraveled really fast after the Nationals took an early 3-0 lead in the second inning.

Additionally, what made Friday night’s loss even worse was that The Nationals lost slugger Kyle Schwarber in the second inning when he grabbed at his hamstring after a single. Schwarber hit a franchise record 16 home runs in June. Schwarber was placed on the 10-IL list and many think it is going to be a while until he returns to the lineup.

In today’s game, Joe Ross had a great performance and gave everything that he could for his teammates a chance to win by striking out 11 which was his most strikeouts since 2017, over 6 ⅔ innings.

Ross in his post-game press conference with reporters noticed the increased amount of injuries that have happened and the “next guy up” mentality for the Nationals over the coming week: “It’s kind of tough seeing pitchers go down, obviously Schwarber having the hottest month of all time going down,” right-hander Joe Ross said. “But, you know, you’ve just gotta have that kind of mentality to compete. Next guy up. Come out and make a play.”

Either way, the All-Star break can not come fast enough, and the Nationals have a lot of work to do in the second half of the season, and still, within a striking position in the NL East, there are only two really big questions around South Capitol street are the Nationals going to be “buyers” at the trade deadline and how long can the team hang around just enough in the NL East before key players can come back to the IL list.

Oh, it’s going to be interesting, to say the least, but isn’t that what makes baseball fun?