HomePerspectivesPerspective: Call Me Crazy, but I'm excited about the Nats future 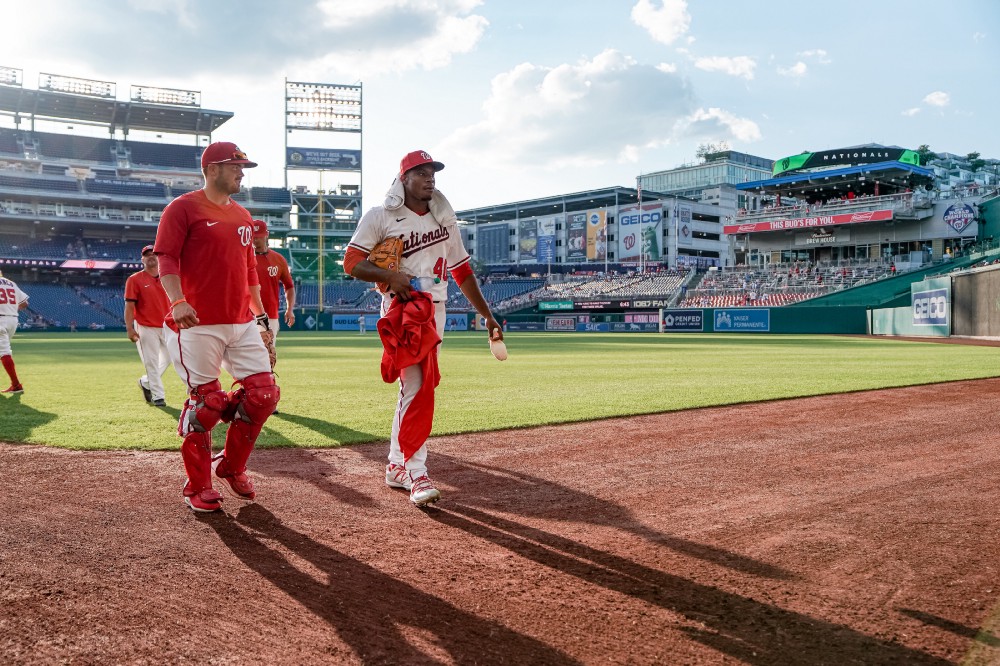 Perspective: Call Me Crazy, but I’m excited about the Nats future

No matter how depressing the last two weeks have been for Nationals fans, by trading away fan favorites such as Trea Turner and Max Scherzer, and some heartbreaking losses, the future of the Washington Nationals is going to be fun to watch.

With the departure of the last remaining 2019 World Series Washington Nationals during this past trade deadline, many Nationals fans including myself have started to look towards the future. However, many of us are looking towards the future with a bleak outlook, for me, I am really excited for the Nats future.

Yes, the growing pains are going to be really hard, and the team is going to lose a lot of heartbreakers and have some amazing moments to celebrate, it’s going to be hard to see some of our favorite players in highlights in different uniforms. It’s going to be hard to watch some of our favorite players finally getting the notice that they truly deserve, but it’s time to focus on the future and not on the past, and that’s why I am excited to be a Washington Nationals fan and here’s a couple of reasons why:

Juan Soto –  Getting to see Juan Soto play on a daily basis over the past couple of years and watching him play over the next couple of years, is just really special. There is just something about this 22 year old outfielder that is just fun to watch. From his famous “Soto Shuffle,” after taking or missing that perfect pitch, or his smile when he makes a great play in the outfield, watching Juan Soto has become one of my favorite players on the team.

(Related Article: Perspective: Juan Soto Should Be A Washington Nationals For Life)

With the older players now gone, a lot of eyes have turned to Soto to be a leader in the clubhouse, and the Nationals and the Learners just need to bite the bullet and make him an offer that he can’t refuse so that he will be wearing a curly W for the rest of his career or at least for the foreseeable future.

The Nationals now have a solid foundation of young players that hopefully will develop and be enjoyable to watch over the next few years. Yes, Kieboom and Robles have struggled big time, and Rizzo is still holding out hope for Kieboom to develop, however, recently, Kieboom has shown some sparks at the plate which is a good sign. Over the past seven games, Kieboom has had 26 at bats, where he has hit two homeruns, eight hits, scored four runs, had six strikeouts and has a batting average of .308, and a slugging percentage of .577.

On the field, Kieboom is still developing at third base and has made some bad throws from third, however, with the youngster becoming the everyday third baseman he can work out those kinks and get more reps during the offseason so that he can become even more comfortable at the hot corner.  During the past couple of games at third, Kieboom has committed four errors out of 111 innings played at third base.

(Related Article: Perspective: It is Too Early to Judge Carter Kieboom?)

Obviously, Kieboom is a project and one that Rizzo needs to figure out what they are doing to do in the coming years and seasons. One idea could be moving Kieboom to shortstop and then during the offseason look for a third baseman who might have the pop and the defensive skills to man the hot corner. [Hint…. Bryant]

Another prospect that I am looking forward to watching develop is Nationals catching prospect Keibert Jose Ruiz. There is obviously a reason why Rizzo made the Dodgers send this catching prospect to the Nationals in return for a Cy-Young winner and a potential NL shortstop MVP. According to MLB.com, Ruiz is ranked at number 39 in the top 100 prospects right ahead of Josiah Gray.

Signed by the Dodgers for $140,000 out of Venezuela in 2014, Ruiz began to move quickly after hitting .374/.412/.527 in his U.S. debut two years later and spent 2018 in Double-A at age 19. He stalled a bit in two seasons there, however, as Will Smith surpassed him on the organization’s depth chart. He spent 2020 at the alternate training site and got only eight official at-bats with the Dodgers, though he did homer off Julio Teheran in his first big league trip to the plate. He showed offensive improvement this season at Triple-A Oklahoma City, where he hit .311/.381/.6131 with 16 homers in 52 games

If I had to  rank my excitement level for the future, pitching would rank number one on my list. We have already seen a preview of what the future Washington Nationals top pitching prospects will look like. Over the past few games we’ve seen Josiah Gray show why he was ranked in Baseball America’s top Prospects and why Mike Rizzo traded for him from the Dodgers. Over the past few games Gray has pitched in 10 innings for the Nationals and has given up three runs (two of them home runs) over eight hits, and has an ERA of 1.80.  Obviously, as more and more players see pitches from Gray there will be adjustments made and his ERA will creep up; however, the future’s looking good for this pitcher.

Waiting in the wings are some other great pitching prospects including Cade Cavialli and Jackson Rutledge. I am sure that we are going to get to see an up close and personal look at these other two prospects in the majors soon.

(Related Article: In the Clubhouse with the Nats Report: Cade Cavalli)

No matter how depressing the last two weeks have been for Nationals fans, by trading away fan favorites such as Trea Turner and Max Scherzer, and some heartbreaking losses, the future of the Washington Nationals is going to be fun to watch.

I think it’s just as much fun as seeing a young Stephen Strasburg and Bryce Harper start to make noise for the Nationals in the 2010’s … Don’t worry Nationals fans, we are going to be okay!