Down on the Farm…. Minor League Baseball Teams End the 2021 Regular Season

The Minor League Baseball Season ended today for all of the Nationals affiliate teams. Here is a wrap-up on how the teams performed this season. 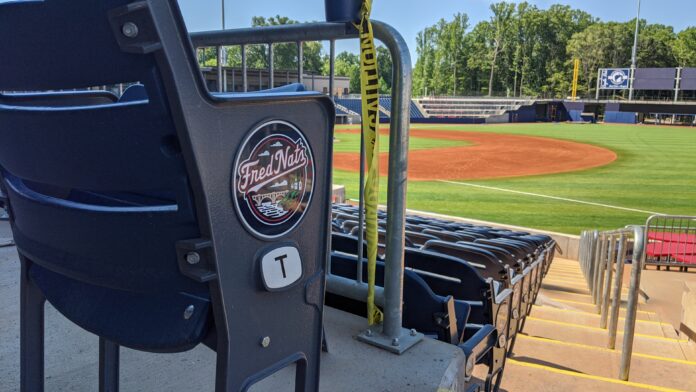 This afternoon marked the end of the 2021 Minor League Baseball Season. Here is a wrap-up on how the Nationals farm teams performed this year.

This afternoon marked the end of the 2021 inaugural Fredricksburg Nationals season. The team ended the season on a four-game winning streak and winning four series wins in a row. The team ended the season in last place in the Low A East North Divison with a 44-76 record. The Fred Nats also had 37 sellouts in 57 home games. Not bad for their first season in Fredericksburg, VA.

2021 marked the first season that the Wilmington Blue Rocks were affiliated with the Washington Nationals. Unfortunately, the Blue Rocks were unable to play their last game today against Bowling Green due to weather.

The Blue Rocks finished in fourth place in the High-A East North Standings with a record of 52-64. RHP Matt Cornin lead the team with four saves, and LHP Alex Troop led the team in wins with eight. Outfielder Justin Connell led the Blue Rocks with a batting average of .293 and shortstop Yasel Antuna led the team with 55 runs and RBI’s with 65.

The Latest News on Washington Nationals Prospects on The Nats Report

The Harrisburg Senators concluded another year of being part of the Washington Nationals farm system with a 42-76 record and finished in last place in Double-A Northeast Standings. Second baseman Cole Freeman led the team in Batting Average (.267); Runs (57); and Stolen Bases (15). First baseman K.J. Harrison led the Senators with 14 home runs this season. Right-handed pitcher Luis Reyes led the team in wins with seven and Right-handed Mario Sanchez led the team in strikeouts (107), ERA (3.98) and WHIP (1.08)

2021 marked the first season that the Rochester Red Wings were affiliated with the Washington Nationals.

The Red Wings regular season ended with a 5-1 loss to the Buffalo Bisons Sunday afternoon at Frontier Field and went 1-for-7 with runners in scoring position and left 11 on base. Rochester will participate in the “Triple-A Final Stretch,” in which they will play 10 games as part of a new postseason tournament featuring all 30 Triple-A clubs.

For each of the Triple-A leagues, a regular-season champion will be crowned based on the overall winning percentage through the originally scheduled games. Among all 30 teams from both leagues, a single Triple-A Final Stretch winner will be awarded based on the highest overall winning percentage during the added 10 games. The winning club will be awarded a prize from Major League Baseball.