Washington Nationals And Davey Martinez On A Multi-Year Contract Extension

Despite a rough 2020, the Washington Nationals and Davey Martinez Agree on a 3 Year Contract Extension starting in 2021. Davey Martinez becomes the first manager in Nationals club history to return for a fourth season 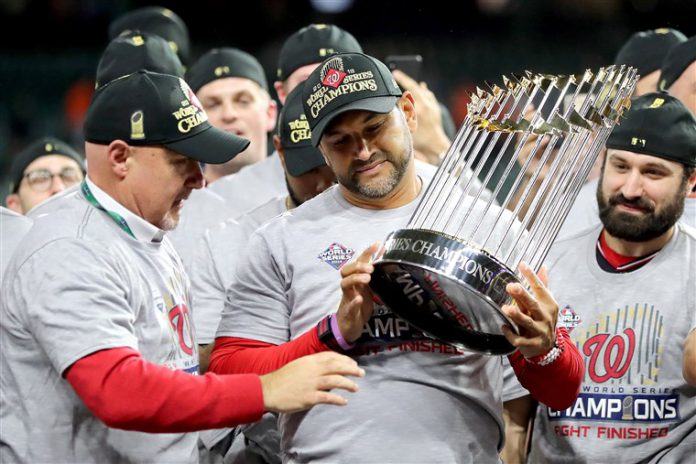 In the press release announcing the contract extension, Washington Nationals Managing Principal Owner Mark D. Lerner is quoted as saying: “Three years ago when we selected Davey to be our Manager, he made a promise to our fans that he would bring a World Championship back to Washington, D.C… There was never any doubt in my mind that he would make that dream a reality. Davey’s determination and unwavering support of his players is admirable. We are so fortunate to have him leading our clubhouse each and every day.”

“I can’t say enough about Davey’s leadership qualities and the poise he shows under pressure,” said Washington Nationals President of Baseball Operations and General Manager Mike Rizzo. “The players, coaches and staff have the utmost respect for him as a manager and a person. There is no one else our team would rather have at the helm. I look forward to our continued partnership as we work together to bring another World Series Championship to our fans.”

“Davey is exactly the right person to lead our clubhouse for years to come,” said Lerner Sports Group Chief Operating Officer Alan H. Gottlieb. “He has quickly established himself as one of the most respected managers in Major League Baseball and we are thrilled to have him as part of our organization.”

There are multiple reports what the contract looks like; however, it has been reported that Davey Martinez will receive a 3-year extension from the Nats for about $2.5 million a year starting 2021.

Davey Martinez was hired back during the winter of 2017 after the Nationals did not extend Dusty Baker‘s contract. In 2018, Martinez led an injury-riddled Washington Nationals to an 82-80 season.

Recently signed Nationals General manager Mike Rizzo said in a September 6th interview on 106.7 the Fan in Washington DC, that getting a contract extension was significant to him. “That’s priority one, is to get Davey taken care of,” Rizzo said then. “My plan is, and my preference is, to not pick up the option and to go beyond that. That’s the plan going forward. See if we can get something done. Negotiate a longer-term deal with him that goes beyond just picking up the option.”

It only took three weeks to figure out the new contract, and we are glad that the Nationals got it done, now we absolutely know that “Bumpy Roads lead to Beautiful places.”