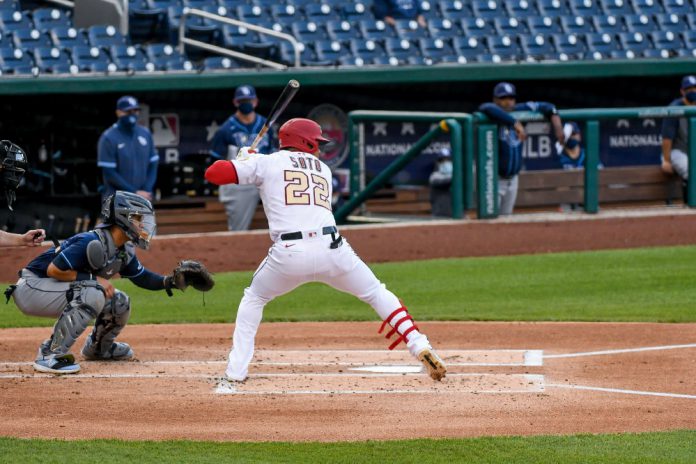 The Nationals won three of four against the Phillies but were crushed 12-3 on Wednesday. Juan Soto’s two-run home run in the ninth was a rare bright spot for Washington, which fell to 23-33.

The Washington Nationals will be looking to rebound following a tough loss in the series finale to the Philadelphia Phillies when they open the final series tonight against the New York Mets.

Tonight marks Corbin‘s third start against New York (NL) this season, and is 3-1 with a 3.38 ERA (16 ER / 42.2 IP) with 51 strikeouts and 11 walks in seven career starts against the Mets since joining the Nationals.

Corbin suffered the loss after giving up a season-high seven runs and 14 hits with seven strikeouts and no walks in Washington’s 7-3 defeat against Miami on September 19, 2020.

And the Winner Is….

Both Juan Soto and Trea Turner are in the “thick of races for individual titles. Juan Soto is entering Thursday leading the National League batting title race with a .352 batting average, which is ahead of Atlanta’s first base Freddie Freeman whose batting average is at .343.

Streaking to the End…

Andrew Stevenson has hit safely in a career-high eight straight games. During the streak, Stevenson is hitting .375 (9-for-24) with four doubles, one triple, seven RBI, one HBP, two walks, one stolen base, and four runs scored. Five of the nine hits have come with runners in scoring position.

2019 – The Nationals clinched a Wild Card berth following a doubleheader sweep of the Philadelphia Phillies coupled with a loss by the Chicago Cubs. Following the 6-5 win in game two, the Nationals stayed on the field to watch the Pirates finish off the Cubs to put the Nationals in the Postseason officially. A celebration ensued on the field and eventually carried into the clubhouse. It marked Washington’s fifth Postseason appearance and first via one of two National League Wild Card spots.