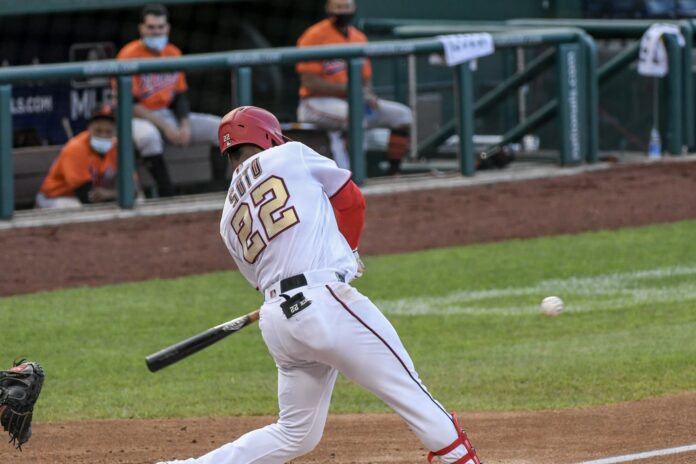 2020 marked the first time since World War II that Major League Baseball did not have an All-Star Game due to the pandemic-shortened 2020 season and schedule.

Washington Nationals left fielder Juan Soto, and shortstop Trea Turner were honored for their standout performances during the 2020 season. Specifically, Soto was named as MLB first-team outfielder. Soto led the majors in on-base, slugging, and OPS percentages during the 2020 season and was rewarded for being recognized alongside Mike Trout and Mookie Betts.

Even though Turner didn’t make the first-team, he did make the second-team. Turner led all Major League shortstops in batting average, on-base, OPS, and slugging percentages.

The now 22-year-old slugger was a beast at the plate in 2020 despite missing 13 games (eight due to what he believes was a false positive test for COVID-19, five due to a sore elbow).

Soto won the National League batting title with a .351 average and led the majors in on-base percentage (.490), slugging percentage (.695) and OPS (1.185). Only Ronald Acuña Jr. bested his home run rate (one per 11.8 at-bats). In addition to this award, Soto also won his first silver slugger award.

Last year, Major League Baseball created the All-Team to recognize a player’s full-season performances, given that All-Star picks only take into consideration their first-half performance.

During an interview on MLB Network, Soto discussed how he lowered his “chase rate” and further improve his plate disciple from 2019 to 2020. During the 2019 offseason, Soto said that he “learned more about the strike-zone…” and thanked Nationals hitting coach Kevin Long for helping him improve at the plate in 2020.

Additionally, during the interview, Soto discussed his hitting coaches’ influence during his time in minors and how that influence continues today.